What is Erie County Climate Action?

Climate change poses a serious threat to our community, and local governments across the world are mobilizing to reduce climate impacts and adapt to make their communities more resilient.  In June 2017 Erie County Executive Mark Poloncarz issued Executive Order #17, which commits Erie County to meeting the U.S. goals of the Paris Climate Agreement, which are 26-28% reduction of greenhouse gas (GHG) emissions by 2025 compared to a 2005 baseline, both in its internal operations and community-wide. Through the leadership of the County Executive, a County Green Team with representatives from all County Departments and Offices, including those not under the oversight of the County Executive, developed a Climate Action and Sustainability Plan for internal operations that contains even more aggressive goals for County government operations than the Paris Climate Agreement. This plan was issued in January 2019 and formally adopted by the County Legislature in February of 2019. For more information, visit: www.erie.gov/sustainability.

The County has made good progress within its own operations and has already met the goals of the Paris Climate Agreement.  In fact, the most recent GHG inventory found more than a 28% reduction in GHG emissions in 2018 compared to the baseline year of 2005.  However, the most recent community-wide GHG inventory shows only a 12% decrease in GHG emissions as compared to that 2005 baseline.

In order to address the community-wide emissions, Erie County’s Environmental Management Council, which advises the County on environmental issues, formed a Community Climate Change Task Force in January 2019. The County Executive recognized this Task Force as its official climate change advisory committee through Executive Order #20.  The Task Force has key stakeholders in a variety of sectors – municipalities, community-based organizations, not-for-profits, education, utilities, transportation, as well as youth representatives and the Buffalo Museum of Science, which until the pandemic hosted the meetings. The Task Force has been laying the groundwork for a larger Community Climate Action Plan (CCAP) by meeting monthly to discuss how current programs can work together to mitigate and adapt to climate change. The group has agreed that a CCAP is needed and that climate justice and equity must be the lens through which that plan is based. 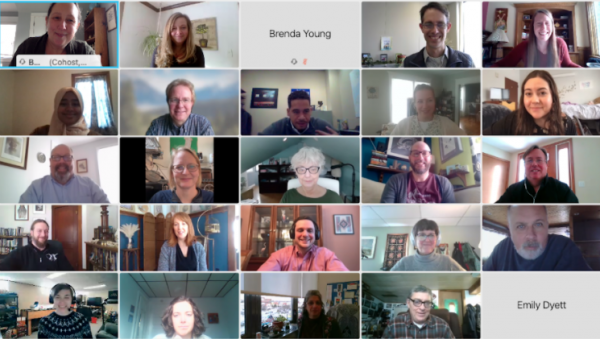 During the course of the County’s work with the Task Force, New York State passed one of the most aggressive pieces of climate legislation in the country – the Climate Leadership and Community Protection Act (CLCPA).  Many members of the County’s Task Force had worked for years to get this critical legislation passed. The Act creates a Climate Action Council to develop a plan to achieve net zero GHG emissions.  The bill requires 40% emissions reductions in absolute terms from 1990 levels by 2030 and 85% emissions reductions by 2050. To reach the target of net zero emissions, the CLCPA allows for any remaining emissions beyond 85% to either be directly reduced, or offset through projects that remove greenhouse gases from the atmosphere. Moreover, the Act includes several environmental justice components, including a requirement to direct at least 35-40% of the program’s benefits to historically disadvantaged communities.

The CLCPA is now the context within which the County should set goals for community-wide GHG emission reductions. While the State’s Climate Action Council is in the process of creating its statewide plan, the County’s community climate action planning process should dovetail with the State’s plans and be developed in the context of the CLCPA’s emission reduction and environmental justice goals. To reach the CLCPA climate and equity goals, Erie County’s CCAP will focus on place-based initiatives and solutions that are developed through community engagement.  Press here to visit the New York State Climate Act website and learn about this aggressive legislation. 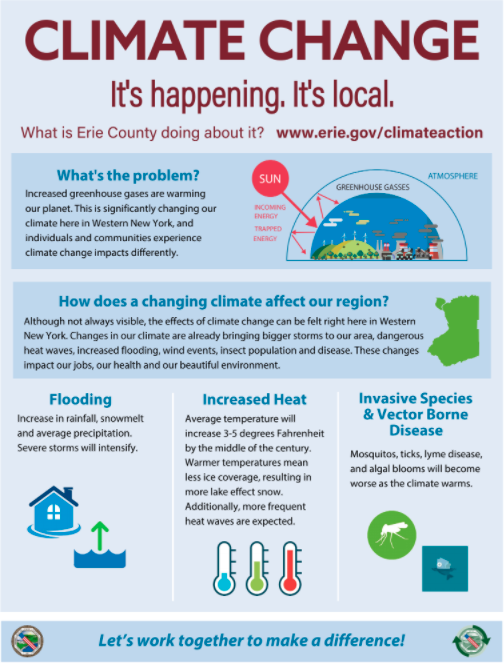